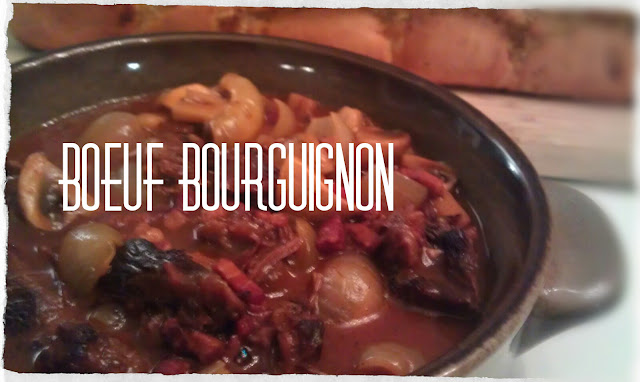 Now I’m by no means an expert on French Cooking.  Actually I know very little about it.  If I could speak the darn language it would probably make things a lot easier, but because I can’t even pronounce written French, attempting to cook anything with a fancy pancy French name seems pointless.  I did enroll into French when I started secondary school, but the timetable clashed with my other electives and so I had to forego the privilege of learning what I think is the most beautiful sounding language in the world. 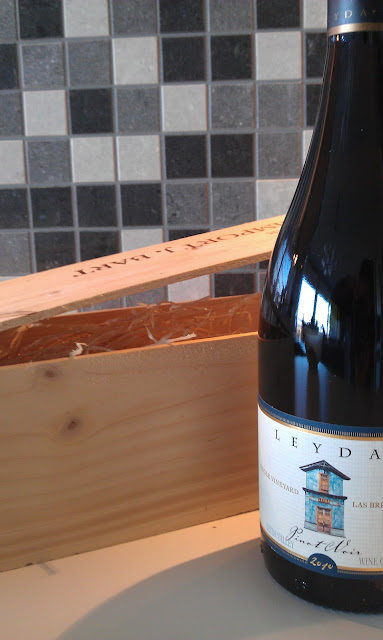 So anyway, about the only French dish that I at least think I know how to cook is Boeuf Bourguignon (which literally translated is Beef Burgundy, burgundy being the region in which the dish was invented and also the red wine that is traditionally used to soak the beef in).  And it’s so delicious, it really makes me want to discover more about French cuisine.  Will add it to my bucket list. 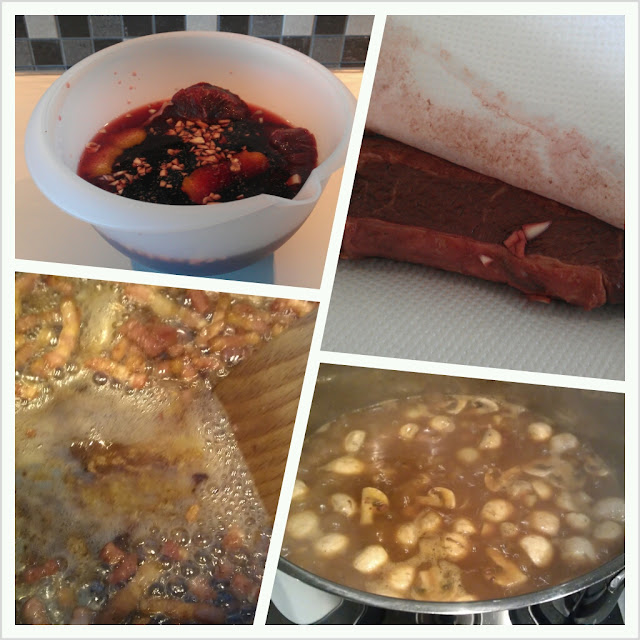 I could try and impress you by telling you that Boeuf Bourguignon is what the French like to call a ragout, which is a fancy french name for a stew. Truth is I did a little research before writing this post and just found that out myself.  I’ve heard this term brandied about for a while now by various television cooks but I actually never quite clicked on as to what they were referring to.  Now I know.  And so do you.

In a nutshell, Boeuf Bourguignon is a slow cooked stew, whereby the beef is cooked in red wine and stock, with mushrooms and mini onions added nearer the end.  Bacon is also usually included.

If you want to see a cute and interesting demonstration video on how to make Boeuf Bourguignon that takes you back in time but is surprisingly instructive, then take a look at this Julia Child video on YouTube.  I found it a fascinating watch!  Apparently after this episode viewed in the US in the 1960s, it started a major Boeuf Bourguignon trend, with the dish being extremely popular at dinner parties.  I wouldn’t know.  I’m an 80s child. 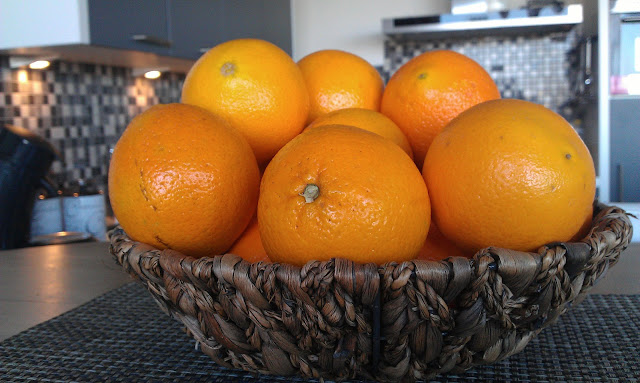 Ragouts (or stews or casseroles if you prefer) are one of my favourite meals to cook, especially when entertaining. For me, they are usually reserved strictly for the winter.  But there is just something so incredibly satisfying about having your food cooking away, filling the house with incredible aromas while you laze around on the couch on a Sunday afternoon.  And when cooking for others, it means you can get all the prep work completed long before your guests arrive allowing for stress-free entertaining.

My version is adapted from Annabel Langbein’s recipe in her “The Best of Annabel Langbein:  Great Food for Busy Lives“.  It’s incredibly tasty with rich fullsome flavours.  Annabel cooks hers on the stove, which I did also for years, until I bought a Dutch Oven recently and am now obsessed with cooking everything in the oven.  Annabel adds some orange peel to her recipe which adds a nice fruity touch to complement the already rich fruitiness of the red wine.  This is, however, not authentic. I also like to serve my Boeuf Bourguignon with a rustic loaf of bread.  But you could serve with potatoes instead.

A final tip – this really does taste better if you make the effort of marinating the beef in the red wine overnight in the fridge.  Much to my exasperation, I almost always forget to do this.  But it’s really worth remembering to do the night before you intend to cook it. 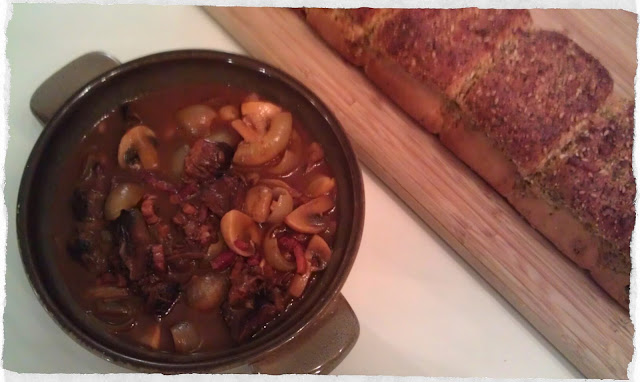 Boeuf Bourguignon
2013-04-15 13:11:36
Serves 6
Write a review
Save Recipe
Print
Ingredients
1 1/2 kg stewing beef (runderlappen)
500 ml of red wine
1 strip of orange rind
2 bay leaves (laurierbladen)
ground pepper
3 cloves garlic, crushed (knoflook tenen)
knob of butter
1 packet of bacon pieces
2 tablespoons tomato paste
2 tablespoons of flour (tarwebloem)
2 cups of beef stock (runderbouillon)
14 baby onions, boiled for 5 minutes (baby-uitjes)
300 g button mushrooms (champignons)
Instructions
the night before ...
Chop the beef into rough chunks, discarding any of the tough sinewy bits. Pop into a bowl and pour the red wine over. Add the orange rind, bay leaves, garlic and a good couple of twists of ground pepper. Cover and put in the fridge to marinate overnight.
the next day ...
Preheat the oven to 140 degrees Celsius (only if you are using the oven method).
Take the beef out of the red wine marinade and dry it off between paper towels. This stops the meat from poaching in the frying pan.
Fry the meat in the butter in a large pot or preferably in a Dutch Oven or Casserole Dish (i.e. a big pot that can also be put in the oven). You want the heat nice and hot so that you brown the meat really well. This step is crucial, as browning the meat adds enormous flavour to the dish. Make sure that you don't "crowd the pan" when frying - if you put too much meat in the pan in one go, then you end up poaching and steaming the beef rather than frying. Depending on the size of your frying pan, this might mean that you have to cook your meat in batches.
Once the beef is browned, transfer to a clean bowl.
Fry the bacon pieces in the same big pot. By now you should have a lot of nice brownings stuck to the bottom of the pot. Yum yum!
Once the bacon is ready, add the tomato paste and flour to make a type of "roux". In other words, just mix and cook for a few minutes while constantly stirring. The mixture will start to bubble and froth.
Add the marinade to the pot and the stock and bring to the boil. Stir well to lift off all the brownings on the bottom of the pot.
Return the beef to the pot and either simmer on the stove for 3 hours (low heat) or chuck in the pre-heated oven for the same amount of time.
Meanwhile, boil the onions for 5 minutes and add both these and the mushrooms to the pot in the last half hour of cooking.
Eet Smakelijk!!
Monique xx
Notes
Approximate WeightWatchers ProPoints value per serve: 9
Adapted from Annabel Langbein
Adapted from Annabel Langbein
My Little Chequered Kitchen http://mylittlechequeredkitchen.com/
Wordpress Recipe Plugin by Recipe Card