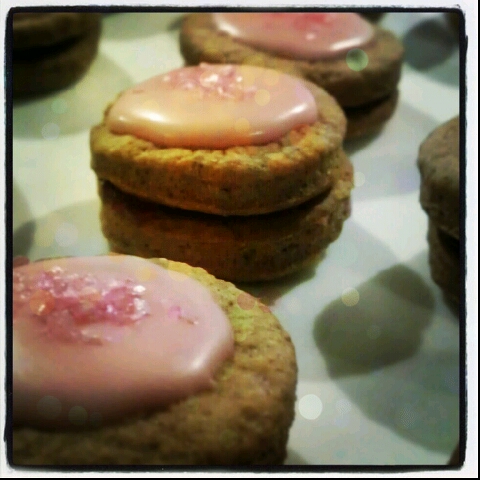 A New Zealander may not immediately link Belgium Biscuits with Valentines Day, but I was searching for an original idea (I was determined not to go down the decorated cup cake route) when I remembered that Belgium Biscuits had been on my list to make for a while now. I mean, they fit the criteria right?  They’re pink, filled with jam, and these ones are cute miniature versions.  Perfect! 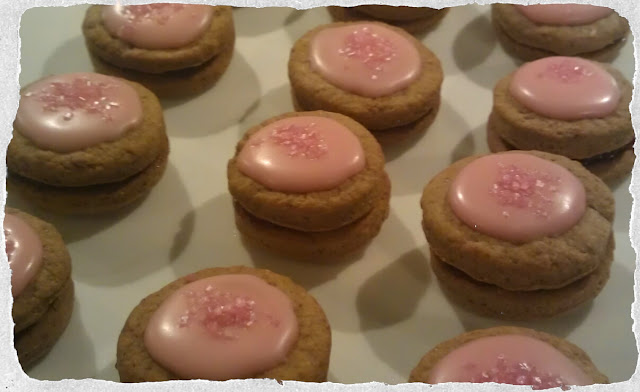 For those of you who aren’t from New Zealand, a little history lesson might be in order.  Belgium Biscuits are another baked Kiwi classic, although I admit that I’ve only ever tried the store-bought versions.  They evolved from the (Scottish) Empire Biscuits which traditionally are made from two plain biscuits being sandwiched together with jam, and covered in white icing and a glace cherry (or something similar).  However, the New Zealand Belgium Biscuit differs slightly in that the biscuit is made with a cinnamon spice mix (reminiscent of Dutch Speculaas cookies) and are usually covered in pink glace icing.

So what has this got to do with Belgium you may ask?  Absolutely nothing!  Both the Belgium and the Empire biscuit were originally called German Biscuits, but during the First World War, the name was changed to either Empire or Belgium as, of course, it suddenly became very unpopular for anything to be associated with Germany. 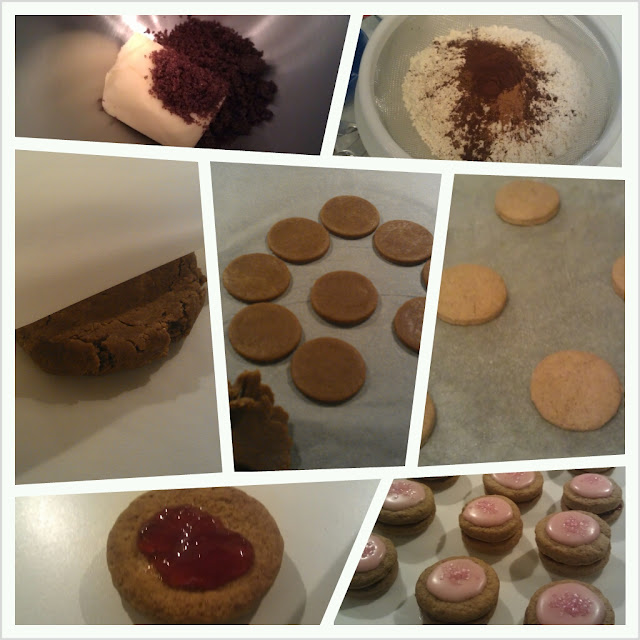 The classic Belgium Biscuit recipe can be found in The Edmond’s Cookbook (the quintessential New Zealand cookbook) and there aren’t, it seems, many variations on this recipe in existance.  I did find a couple of recipes which use a more buttery cookie dough, and thereby producing a more classic “cookie”.  But for me, a Belgium Biscuit is at its best when made with a dry, crumbly biscuit which complements the gooeyness of the jam filling and the super sweet glace icing.  I therefore still swear by the original Edmond’s recipe.

I do also have to mention that this recipe is slightly fiddly and time consuming.  But then a Valentine’s gift wouldn’t be the same if it hadn’t taken some effort right?  They take quite some time to assemble and you need a little bit of skill when dealing with the biscuit dough and cutting out the cookie shapes.  However, the advantage of a cookie dough that contains less butter is that you don’t have to worry as much about the dough getting too warm and soft to handle and the rounds spreading in the oven.  This biscuit dough is pretty user-friendly. 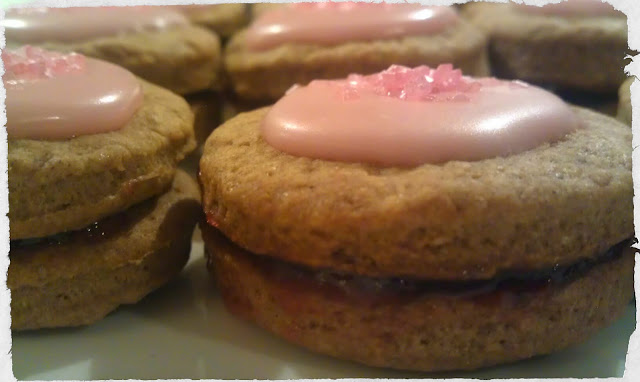 Belgium Biscuits
2013-04-18 04:38:36
Yields 24
Write a review
Save Recipe
Print
Ingredients
to make the biscuit ...
125g butter softened at room temperature
1/4 cup brown sugar (basterdsuiker)
1 large egg
2 cups flour (tarwebloem)
1 tspn baking powder (bakpoeder)
1 tspn cinnamon (kaneel)
1 tspn ground ginger (gemberwortel gemalen)
1 tspn mixed spice (or koek & speculaas kruiden)
1 tspn cocoa (cacaopoeder)
to make the icing ...
1 cup icing sugar (poedersuiker)
1/4 tspn vanilla essence
a tiny amount of red food colouring or paste
filling ...
raspberry or strawberry jam
Instructions
Preheat the oven to 180 degrees celcius.
Cream the butter and sugar using an electric mixer until light and fluffy in texture.
Add in the egg and continue beating until incorporated.
Add the dry ingredients to a separate bowl (flour, baking powder, cinnamon, ginger, mixed spice and cocoa) and mix until combined.
Add the dry ingredients to the creamed mixture and combine until it forms a firm dough.
Turn the dough out onto a piece of baking paper. Press to form a round flat circle and then place another sheet of baking paper on top. Roll the dough out until it is roughly 3mm thick.
Cut out the biscuits using a cookie cutter (it's up to you how big. My mini versions as pictured were made using a 1 1/2 inch cookie cutter).
Peel away the unused dough and roll out in order to cut out more rounds. Keep doing this until you have no more dough left.
Depending on how warm it is in your kitchen, you might want to put the rounds in the fridge for 10 minutes before baking in the oven to ensure they keep their shape.
Lay the rounds out on a baking tray lined with baking paper and bake in the oven for 10-15 minutes. Watch them carefully as you don't want them too brown!
Cool the biscuits on a cake rake. Once cool, spread the icing on half of them, and spread jam on the others. Sandwich the biscuits together and eat!
Eet Smakelijk!
Monique xx
Notes
Approximate WeightWatcher ProPoints value per yield: 4
Adapted from Edmond's Cookbook
Adapted from Edmond's Cookbook
My Little Chequered Kitchen http://mylittlechequeredkitchen.com/
Wordpress Recipe Plugin by Recipe Card